The inherent safety features of a Na-ion cell are distinct and unique to the chemistry.

The dangers of transporting Li-ion batteries are well documented, and they cannot be discharged below 30% SOC, so cargo cells must be air-freight transported at considerable cost.

However, a sodium-ion cell can be fully discharged to zero volts, akin to a capacitor. In this state, the potential for thermal runaway due to short-circuiting is eliminated.

Faradion are working with the Department for Transport and UN Sub-Committee of Experts on the Transport of Dangerous Goods to develop the framework for the testing and transportation requirements for sodium-ion batteries. See here for more details. 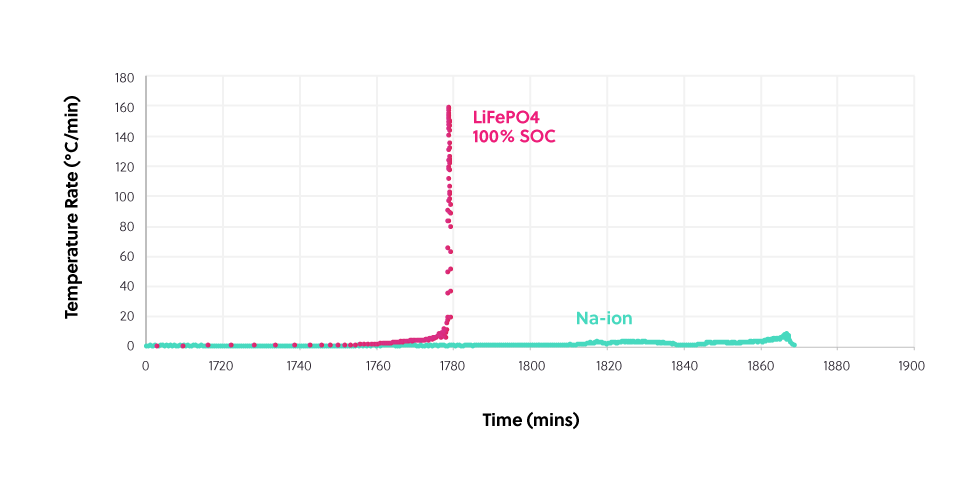 The nature and properties of sodium-ion materials means the chemistry is safer than Li-ion, not only when fully discharged but also when charged.

Sodium-ion battery electrolytes have been shown to be more stable than their lithium-ion counterparts; for example Kuze at al. report that the sodium-ion electrolyte NaPF6 in PC, in combination with a hard carbon anode, releases energy at a temperature 90oC above that of the lithium-ion electrolyte, LiPF6 in EC-DMC with a graphite anode.

Nail penetration of sodium-ion cells at full charge show no flames or evidence of ignition, demonstrating that the technology passes this test successfully.

Are you interested in exploring licensing or investment opportunities in sodium-ion technology? If so, then please