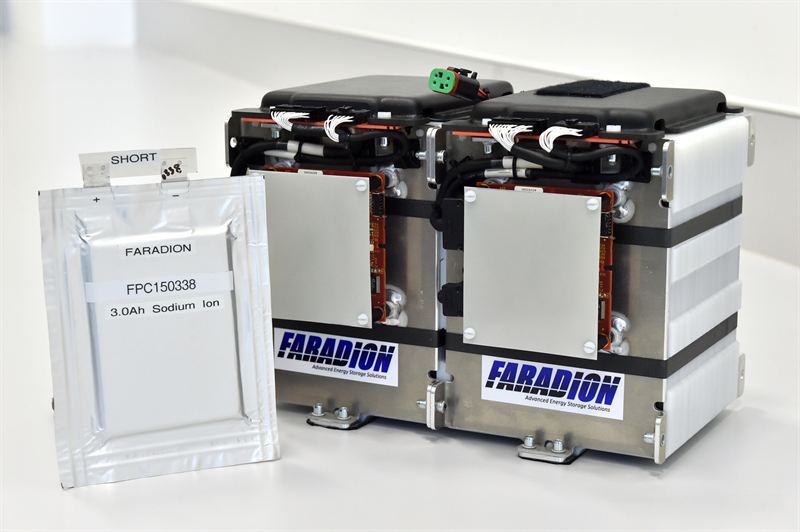 The air transit of more than three billion batteries each year, which is crucial for the energy storage, electric vehicle and consumer electronics industries, could soon become cheaper and easier thanks to pioneering sodium-ion battery technology. This innovation would allow batteries to be transported in a completely discharged state making them effectively inert, and so more straightforward to transport by air.

Faradion’s unique design further reduces the risk of transporting batteries by ensuring any potentially flammable components, such as the electrolyte, have high flashpoints and are present in just small quantities.

Faradion’s Chairman and one of its founders, Dr Chris Wright explains: “Lithium-ion batteries cannot be totally discharged without impacting on their performance – typically they need to retain a charge of around 40 percent of capacity. To minimise risks, industry must comply with a number of stringent but necessary regulations when transporting batteries by freight. Our new chemistry enables our batteries to be totally discharged – and effectively inert –making them easier to transport safely by all modes, including air.”

Faradion is pioneering the next generation of advanced low-cost battery materials. These novel materials employ sodium-ion technology which, when incorporated into batteries, will be virtually indistinguishable from the leading lithium-ion products currently on the market in terms of performance and yet can be sourced from widely available materials – sodium is derived from common salt.

Faradion is pioneering the next generation of advanced, low-cost battery materials. These novel materials employ sodium-ion (Na-ion) technology which, when incorporated into batteries, will be virtually indistinguishable in terms of performance from the leading lithium-ion (Li-ion) products currently on the market.

Na-ion batteries have a number of benefits compared to battery technologies already on the market, with the foremost advantage being the low cost. The sodium salts used to prepare these battery materials are highly abundant, coming from more renewable sources than those of equivalent lithium salts, making them both cheap and easily obtainable. If compared to the equivalent salts used to make Li-ion batteries, the cost is approximately 1/10th.

Faradion was virtually the first investment made by Finance Yorkshire and is headquartered in Sheffield’s Innovation Centre. See more at: www.faradion.co.uk

The full press release can be found here.

Are you interested in exploring licensing or investment opportunities in sodium-ion technology? If so, then please.